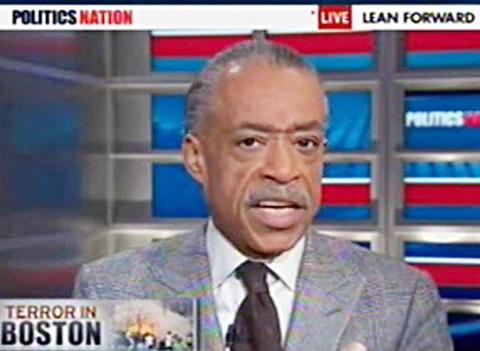 Just a few casual observations about the post-Boston Marathon bombing ordeal and its dramatic conclusion:• After Dzhokhar "Consonant Boy" Tsarnaev was captured, I witnessed a lot of seemingly staged and disturbing flag-waving, high-fiving, partying, cheering, and carrying on as if the Boston Red Sox had just won their first World Series since 1918.

Now you can call me crazy, old-fashioned, or just a plain killjoy, but I find this type of exuberant behavior appalling and disrespectful to the families of 8-year-old Martin Richard, Krystle Campbell, Lingzi Lu, and the scores of people who lost limbs during the bombing.

Sorry, but it makes me feel very uneasy that we've suddenly become hockey spectators chanting, "USA! USA! USA!" during something as tragic as the Boston Marathon bombing. In fact, I find it shameful.

• And what in the hell is up with this post-tragedy ritual of slimy politicians, slimy politician wannabes, bureaucrats, monkey suits, police chiefs, and anyone else in some position of power getting their fat faces before a microphone - and a damn good photo op for their resume - with prepared statements about how everyone DID THEIR DAMN JOB?!

NEWSFLASH: Perform the job that taxpayers pay you to do and GO THE HELL HOME! That's it. Over. Done. Goodbye. Goodnight. Later.

Do you remember the 2010 Copiapó mining accident in Chile? Of course you do. Do you remember the American who actually rescued all those people? Of course you don't. Why? Because the dude - who I believe was a Texan - went there to kick ass, take names, and get those soon-to-be-household celebrity names out of that pit o' hell. In short, he did what he was trained to do and got out of Dodge quicker than you can say, "First of all, I'd like to thank...."

Of course, once all of that self-congratulatory bullshit started last night I stopped watching the media coverage. (Then I suddenly remember that the Chicago Blackhawks were playing!) I may as well been watching reruns of the Grammy Awards presentation. It's just another thing about Americans I find utterly sickening.

• And while we're on the topic, did they reeeeeally need all those people there for just one suspect? They were all standing around doing absolutely nothing but wasting taxpayer money like hot 'n' cold running water. Again, call me old-fashioned, but an old guy sporting filthy overalls, beat-up shoes, and a stupid hat with a dozen of hound dogs could've found that Chechen Muslim bastard quicker than you can say, "Hey, Marty, fetch me another one of those French crullers with an extra-large java with 33, okay? Throw in a hazelnut squirt too!"

• Don't even get me started on a Big Government imposed lockdown in a town where a free country was originated. Folks, you just witnessed the future of your children and grandchildren. Some may call it security, but there's a few of us who prefer to call it exactly what it is: MARTIAL LAW.

I weep for the future.

• Needless to say, EVERYONE in the State-controlled Ministry of Propaganda that is the limp-wristed liberal, lapdog, lamestream, progressive media (including Fox News) do not know a damn thing about what they're saying - neither do their expert-expert choking smoker guests. So-called journalists and reporters ask the most galactically retarded questions, whilst vacuous bimbos like Diane Sawyer and Brian Williams simply do not have a phreakin' clue.

And then you've got the usual gang of morbidly brain-dead chimps like Al Sharpton, Chris Matthews, etc. deliberately feeding you line-after-line of unmitigated BULL and lies about the suspects even before they were known. Per usual, they got it all wrong, in that, it's NEVER white, Bible-thumpin', gun-totin', conservative, Tea Party Christians who committed these heinous acts, but the usual Muslims, Islamofascists, totalitarian leftists who supported Barack Hussein Obama, and the like. It's always been this way. Nothing ever changes about destructive leftists.

I have more, but I can only provide what your collective attention spans can muster at this moment.

Posted by Lee Vanden Brink at 6:39 AM