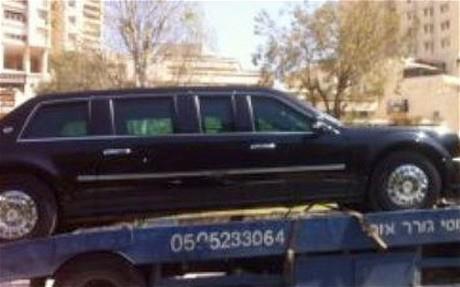 The breakdown of the Obama presidential limousine in Israel is being widely reported, but we would never hear the end of it if this occurred during the Bush administration.
The presidential chauffeur is paid $175,000/year and is now being... blamed by the media for the screw-up. The BBC says "It could be one of the most embarrassing bloopers of Obama's tenure. The 8 ton limo gets only 8 miles to the gallon because it is reinforced with armor plating, ballistic glass and Kevlar.
"It apparently was filled with diesel instead of its standard gasoline fuel. At the present time no one is saying who actually made the mistake of filling the limo with the wrong fuel.
"It will most certainly be a very costly mistake as all the fuels lines will have to be replaced along with the fuel injection system and a through cleaning of the engine which may require it being rebuilt.
With all the high tech gadgetry that supposedly protects the President in his $1.4 million limo, it was taken out of service by simply putting the wrong kind of fuel in it. We have limits to our technological wizardry, don't we."