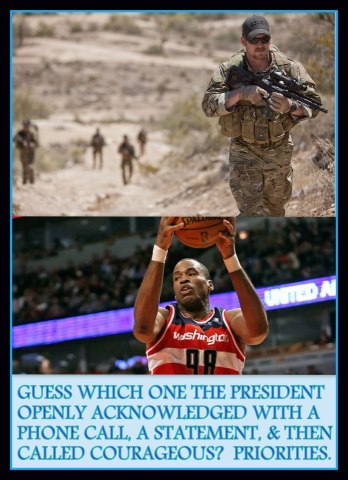 CHRIS KYLE SERVED HIS COUNTRY IN AN EXCEPTIONAL WAY, HIS UNTIMELY DEATH WAS COMPLETELY IGNORED.

WITHIN HOURS OF 'COMING OUT', NBA PLAYER HAD A LABEL FROM OBAMA AS 'COURAGEOUS' & GOT A PHONE CALL.

Hours after Collins disclosed his sexuality Obama reached out by phone, expressing his support and telling Collins he was impressed by his courage, the White House said.

Posted by Lee Vanden Brink at 5:48 AM