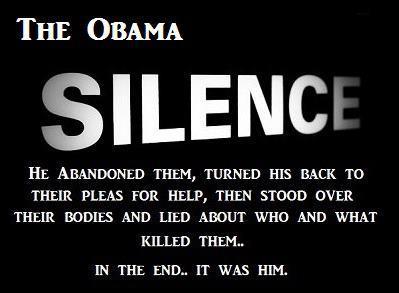 Retired Navy SEAL Billy Allman Is Making A Stunning Accusation  In His Own Words:   "Americans Were Deliberately Left There To Die."
Based on evidence compiled from his contacts in the Special Ops Community, Allman's revelation seems to confirm what far too many of us have suspected all along that's it's entirely possible that Team Obama left people to die in Benghazi as part of a much larger cover-up.

In his report, Allman concludes: "Our team compiled 42 pages of information. When the entire report is read, one can ONLY conclude that these Americans were deliberately left there to die, due to the criminal negligence and inaction on behalf of Hilary Clinton and Barack Obama."

In a matter of days, people who claim the Obama Regime has attempted to intimidate them into silence will be talking to Congress... they'll have some shocking stories to tell and we must act now and see to it that our elected officials act on this scandal that has the potential to take the Obama Regime down.

Posted by Lee Vanden Brink at 5:42 AM